Posted on Our Stories - Blog by Johanna Fallert · May 24, 2019 8:41 AM
Johanna Fallert, Dutchess County Mothers Out Front Team Leader, uses her mom voice to remind us that pollution can cross state lines.

I was born and raised in New Haven and my family and friends reside in Connecticut. Although I live in Poughkeepsie, N.Y., I care about what happens in Connecticut. I now live in Dutchess County, N.Y., where the 1,100 megawatt Cricket Valley Energy Center located in Dover, to be completed by January 2020, will be emitting some 3.6 million metric tons of carbon dioxide, every year for the next 30 to 40 years of its natural life cycle. The people of western Connecticut are downwind and just a few miles away.

Please contact the governor of Connecticut and ask him to do more to protect us, and to lead the way toward investments in renewable energy sources — wind, solar, hydroelectric and geothermal — that don’t harm people or our environment. We have many solutions at our disposal, but the commitment and investments needed to end dependency on fossil fuel is not. The fossil fuel industry has seen to that through its deception and its lobbying influence. 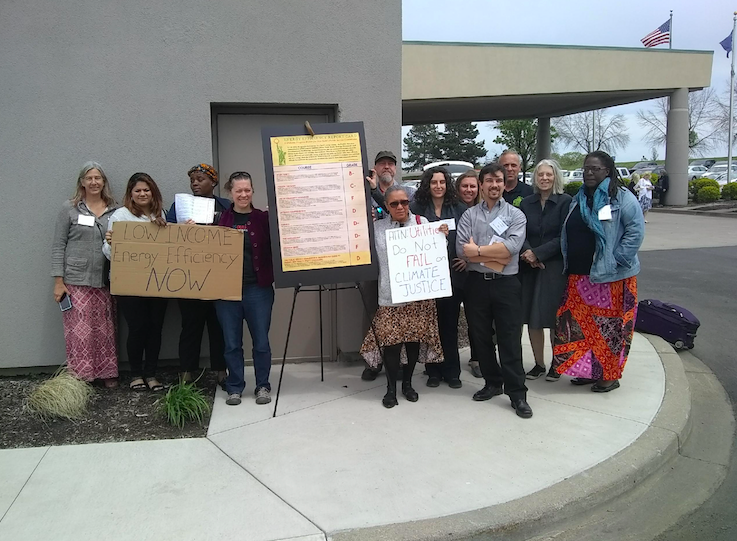 Rochester, NY - Today in Rochester, community groups and renewable energy advocates gathered and held a press conference at the Low Income Forum on Energy, hosted by the Public Service Commission (PSC) and NYSERDA (the New York State Energy Research and Development Authority). The advocates came bearing a “Midterm Report Card on Energy Efficiency,” calling attention to the agencies’ failure to create a process that guarantees real accountability and benefits for low income New Yorkers - the full report card can be found HERE. Today's press conference in Rochester is just the first event in a statewide series; communities and advocates all over New York are calling on NYSERDA and the PSC to make the promises and potential of Governor Cuomo's efficiency policies a reality for low income communities and communities of color across the state.

This opinion piece by Jesse Lederman is a nice tribute to the power of community organizing.

With the support of a coalition of organizations like the Springfield Climate Justice Coalition, Arise for Social Justice, Mother’s Out Front, and the statewide watchdog group HEET, we worked to bring the gas company together with local officials and community members, and in 2017 were able to announce a deal to repair these leaks over time, with a concerted focus on the largest leaks first. The announcement was the first of its kind in Massachusetts.

The Albany Times Union reached out to NYS Mothers Our Front Capital Region team for a reaction to the Williams Pipeline Water Quality permit denial and how that denial will impact the proposed E37 Albany Pipeline loop that is slated to begin its construction by the end of this summer. The newly formed Albany Mothers Out Front team is rapidly working on a strategic plan to oppose this pipeline.

Mothers Out Front is another local group that ties the expansion of natural gas pipelines to climate change.

Mothers Out Front in the Capital Region feels this decision on the Williams pipeline highlights the dangers the proposed E37 Albany Pipeline loop will have on the Hudson riverbed and surrounding communities if approved by the PSC," said local Mothers Out Front organizer Megan Root. "Similar to the Williams pipeline, National Grid has failed to present reliability and resiliency need for the E37 Albany Loop Pipeline to the communities it will serve.

The power of mothers turns a potential "natural" gas plant into a DATA CENTER!

The Cayuga Power Plant in Lansing has announced some major changes to its operation. The Cayuga Power plant is looking to move away from re-powering with natural gas, but instead going in a whole different direction....

"Our strength is really tremendous in influencing decision makers. And so to see that the work we have been doing has really made a really noticeable difference is really empowering and really exciting," says Nora Brown, Activist with Mothers Out Front.

DEP officials began a three-day hearing on the appeal Wednesday, where dozens of community members, experts and officials are expected to speak. Mothers Out Front is not a party in the appeal, but leader Carol Chamberlain said members decided to hold their press conference with other advocacy groups to help raise attention around the issue and put pressure on Gov. Charlie Baker to intervene and revoke the permit.

"We're hoping it will be synergistic by proceeding on different fronts," Chamberlain said.

After a report released by the Greater Boston Physicians for Social Responsibility calling out health risks of the proposed Weymouth Compressor Station, mothers and others rallied!

Members of the citizens group and the action group Mothers Out Front gathered outside the state Department of Environmental Protection’s Boston office to warn of the health and safety threats they say the compressor station would bring to the Fore River basin.

“Governor Baker, do the right thing,” Amy Tai of Mothers Out Front said. “Do the moral thing. Listen to the scientists, doctors, elected leaders, boards of health, first responders and residents of the commonwealth. Rescind this permit. Stop this project.”

On May 15th, Mothers Out Front joined our allies to rally and led a press conference to expose the health risks of the proposed Weymouth Compressor Station.

While the first day of a three-day hearing unfolded inside the Department of Environmental Protection, several dozen members of the Mothers Out Front and other advocacy groups took to the streets to warn that the station would bring environmental and public-health harm to environmental justice communities in the Weymouth area.

"Emissions from this dangerous and dirty fossil fuel infrastructure will threaten the health and safety of the children of the Fore River Basin and beyond," said Anne Goodwin, one of the leaders of Mothers Out Front's Massachusetts chapter. "The northeast pipeline expansion this would be a part of will contribute to climate change at a time when we urgently need to stop using fossil fuels."

Check out this fantastic wind energy discussion played out in a news report on opposing Letters To The Editor regarding the #LightHouseWind Project in NY:

Lakeshore Mothers argued the project would provide host communities with thousands in much-needed tax revenue, have little effect on property values and kill far fewer migratory birds than would perish from unabated climate change. The group also linked climate change to the current flooding in the Great Lakes, which has pushed Lake Ontario's water level to 21 inches above average.

"Climate change is here and accelerating," Lakeshore Mothers writes in the letter. "We are experiencing the impacts of climate change right now, as the shores of Lake Ontario overflow - experiencing historic flooding for the second time in just two years."

ALBANY — Renewable advocates criticized National Grid for its support of a natural gas pipeline and called for a commitment to zero emissions outside a forum convened by the utility on Monday.

National Grid hosted an event focused on strategies to achieve 80 percent emissions reductions by 2050 from 1990 levels at The Jerry, better known as the Albany Capital Center. The utility, which owns a natural gas distribution network in downstate New York and large swaths of upstate, sees accelerated conversions of customers from oil to natural gas as key to achieving that goal.