Skip to main content
For Immediate Release
Contact: Freeda Cathcart, Leader of Mothers Out Front – Roanoke 540-598-7231 contactfreeda@gmail.com
Roanoke Gas’s MVP scam hurts children and teachers
Roanoke, VA – A small group of people gathered on the sidewalk in front of Roanoke Gas to speak up for the families, schools and businesses at risk of being hurt by the recent rate increase. They represented the organizations of Mothers Out Front – Roanoke, the SWVA Poor People’s Campaign and the GFWC Star Woman’s Club.
Rev. David Denham said,
“Roanoke Gas will invest $112 million (over 20 years)  into MVP which will keep on their investment in keeping people in poverty.  On top of that!, Roanoke Gas will increase its charge to customers, they say for the winter weather, but paying for this $112 million looms as the real cost that is on their mind.  Who does this increase impact most, the nearly 50% of those in poverty in the Roanoke region.  The Roanoke Times (2017) posted the results of a Harvard study that showed that a child in Roanoke has among the least opportunity in our country to rise out of that. Roanoke Gas, we have a problem in Roanoke that you are contributing to.”
Retired teacher Cynthia Munley and retired social worker Anne Denham-Lusby both expressed concern about how the MVP could harm the Virginia Retirement System. Cynthia Munley said, “I’m counting on the VRS to manage our funds well and to protect us from risky ventures like the MVP.”
The parent company of Roanoke Gas, RGC Resources, made a bad business decision when they invested in the Mountain Valley Pipeline. Even worse, Roanoke Gas didn’t exercise their right to exit their shipping contract obligation on the MVP last year. Already Roanoke Gas’s first attempt to pass along their MVP costs to their customers was rebuked by the SCC, forcing Roanoke to issue a refund for their overcharges. Now Roanoke Gas is trying to do it again.
Roanoke Gas isn’t the only one stuck with a shipping contract on the MVP. EQT is contracted for 58% and Consolidated Edison is contracted for 12.5% capacity. Both EQT and Consolidated Edison have been trying to sell their capacity for the MVP since last summer. There is more capacity to ship gas away from the Appalachian Basin than the drillers are producing. EQT’s CEO Toby Rice said in a July 2020 earnings call that “there is a 3 Bcf a day gap between what we are producing and what we are able to take away. Adding MVP that takes — that takes you up to call it 37 Bcf a day. So, you’ve got a pretty big gap between capacity and supply in the basin. I think, you couple that with the fact that the basin is going to struggle to grow.”
Instead of admitting RGC Resources made a bad business decision, they are trying to use excuses like the ice storm in Texas and making false claims about not having access to gas from the Appalachian Basin. There are two pipelines with the capability of delivering gas from the Appalachian Basin to Roanoke Gas at less cost than the potential expensive gas from the MVP. If Roanoke Gas made another bad decision by buying gas from Texas during peak cost instead of accessing their reserve LNG tanks or buying gas from the Appalachian Basin then that is no excuse to try to scam their customers by raising their rates.
RGC Resources just increased the pay out on their dividends to their shareholders. On November 30, 2020, Paul Nester, President and CEO of RGC Resources, Inc., stated, “The 5.7% increase reflects our solid financial performance, confidence in our business strategy and our continued commitment to deliver shareholder return.” Roanoke Gas’s recent rate increase shows they are willing to protect shareholder returns at the expense of their customers.
Dominion’s subsidiary, PSNC, is also stuck with a 12.5% shipping contract for capacity on the MVP. This is the company that misled the FERC last fall by saying they needed access to gas through MVP Southgate. PSNC based that on a flawed analysis projecting growth in the gas market, instead there’s been a decline. This creates a risk of approximately $2.5 billion (over 20 years) that Dominion will be obligated to pay if the MVP is completed whether there’s a market for the expensive gas or not.
Dominion shareholders are already reeling from a one-third reduction in their dividends after Dominion canceled their Atlantic Coast Pipeline. Dominion’s estimated loss from the ACP project was between $2.3 – $2.8 billion. The Virginia Retirement System and the state’s college savings plan (529Plan) have over 400,000 Dominion shares. If the MVP is completed then it’s reasonable to expect Dominion’s $2.5 billion (over 20 years) bad business decision will once again negatively impact their investors including the VRS and the 529Plan.
A coalition of 30 organizations representing over 125,000 people has formed to hold MVP’s partners (Equitrans Midstream, NextEra Energy, Consolidated Edison, AltaGas, and RGC Resources) responsible for their irresponsible business endeavor. They need to stop hurting our economy and our environment. It’s time they cancel the MVP.
Photo Cynthia Munley, David Denham, and Anne Denham-Lusby was taken by Freeda Cathcart 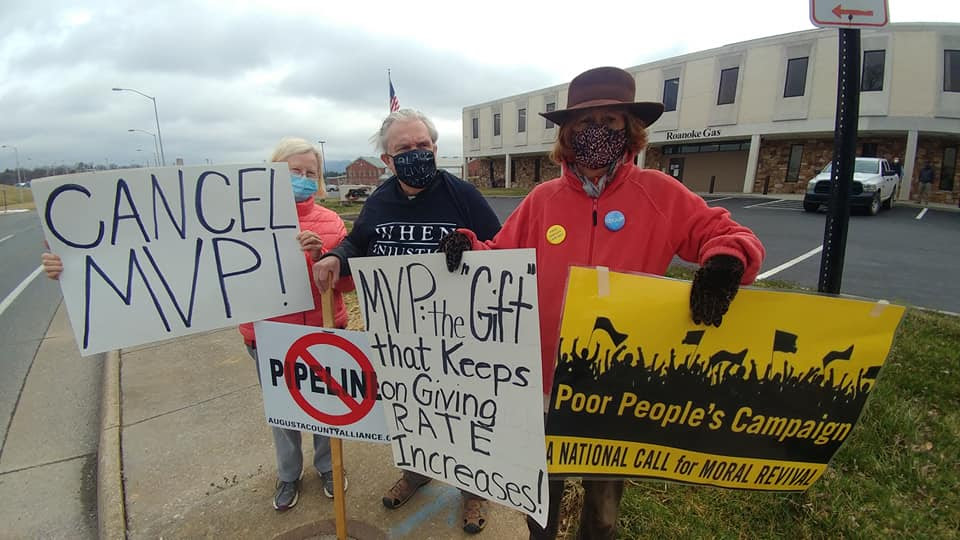 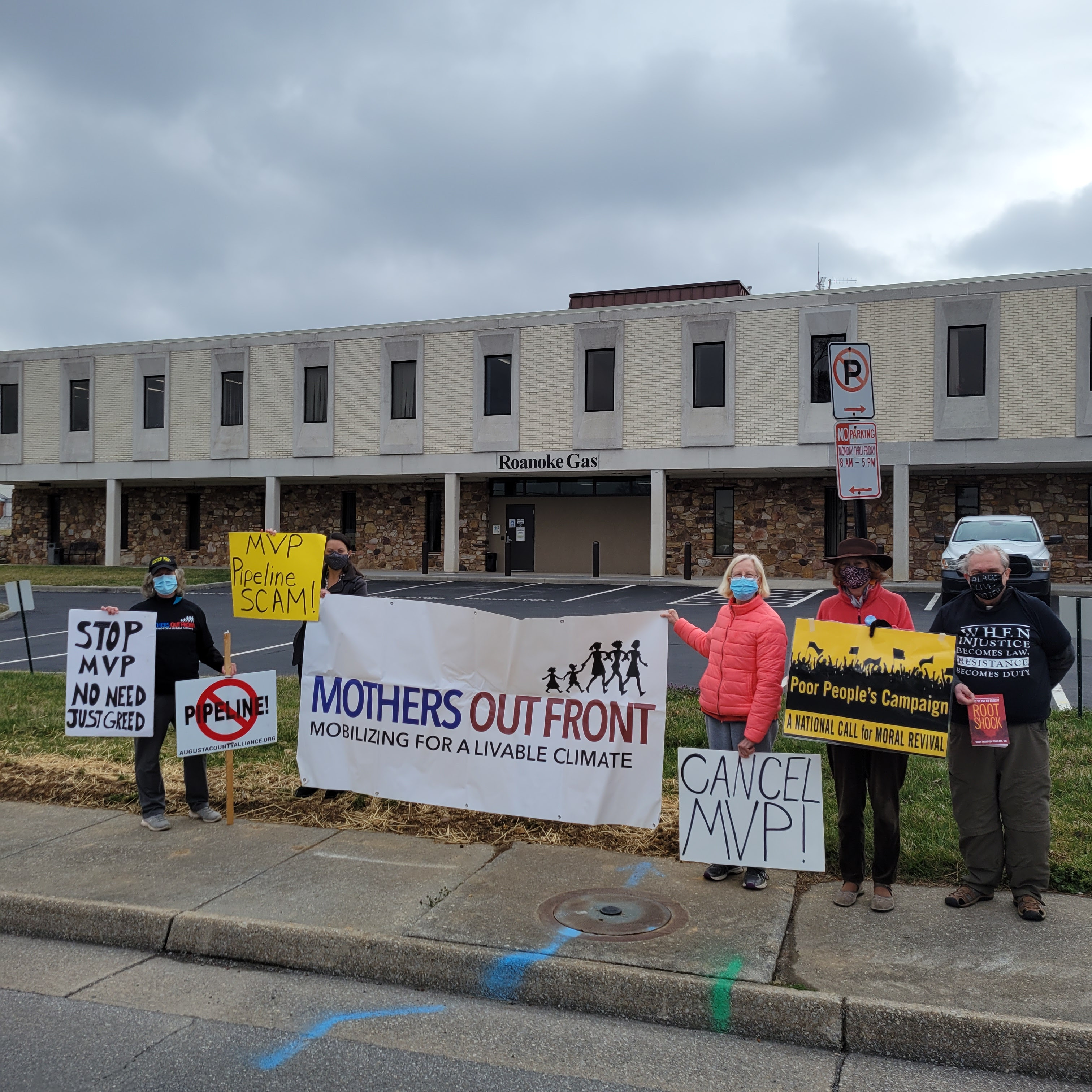